On Saturday 25th July 2020, Krkavci had an unusually packed weekend. We have attended two events at the same time: reenactment of the battle of Sudoměř and Žilinský Kumšt HEMA tournament.

On a non-traditional date of 25th July 2020 the battle of Sudoměř took place again after six centuries. On this day there were even two battles - one in horrible heat shortly after lunchtime; second in the evening after an intense but that more refreshing rain. Krkavci had a noticeable presence by both experienced veterans in full armour and several more humbly clothed recruits in the role of crossbowmen. While Christophe and Karel were dealing blows in the hottest part of the battle with their polearms, the recruits with McLayn were doing great and had a significant part in reducing the numbers of attacking papists by their accurate bolt hits. Meanwhile, Mik was terrifying the enemies and their steeds with thunderous shots from hand cannon. Even though the catholic lord's superiority in numbers was significant both in foot armsmen as well as unusually high number of cavalry, the hussite army has endured and forced the enemies to retereat, as it happened years ago. 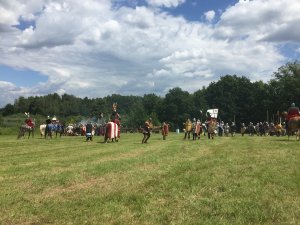 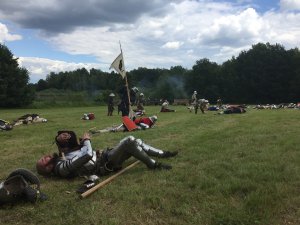 In the camp, Krkavci shared a feast with the company of the noble lord Hynek Krušina of Lichtenburk. The head cook Mik, together with the girls from Krkavci and the friendly company brilliantly managed the kitchen and for three days had cooked magnificent food according to the original medieval recipes. The new tent shed, hand-made by the group members, proved to be worthy. The strong Saturday rain baptized it without any damage neither on the shed itself nor on the crew's clothes. 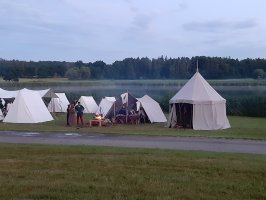 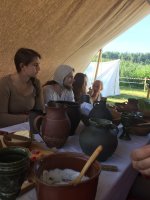 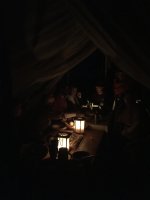 Sudoměř 2020 is going to be remembered as that year's best event of it's kind (nevermind that it is probably the only such event due to the new plague from the east). Comfortable atmosphere in a great company is a guarantee for unforgettable memories. Many thanks to all who participated!

External links to the event (in Czech):

On the same day that the group was deflecting enemies' attacks at Sudoměř, a single representative of Krkavci - Gandalv - went all the way to Žilina, Slovakia to compete in the HEMA tournament Žilinský Kumšt III. Our representative took part in both available categories - sword and buckler and long sword. 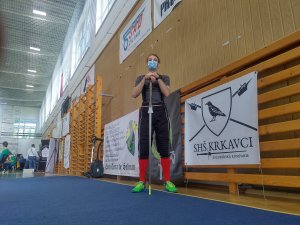 The trip to Žilina started alrady on Friday noon with friendly fencers from the Digladior fencing school to make one bigger unit from Prague. We arrived to Žilina before 8 p.m. so there was just enough time to have a good dinner, clean the weapons and focus on the performance next day. The tournament took place in a sports hall of Spojená škola in the southeast part of Žilina. We arrived to the hall early in the morning in order to register and prepare in time. At the hall entrance, the organisers measured everyone's body temperature and handed out face mask which was mandatory to wear in all indoor areas all the time except when fencing.

Twenty fencers from Czechia, Slovakia and Poland competed in this category. The first phase was group phase, i.e. everyone fought everyone else within a group up to 5 points. Gandalv was in group No. 3 which counted 6 fencers, therefore 5 fights. Out of these 5 fights, Gandalv won 3 times and lost 2 times. Specifically, the fights looked like this:

Gandalv ended up on shared 2nd to 4th place and advanced to the elimination rounds among the best 16 fencers from the group phase. In the elimination rounds that are, as opposed to the group phase, to 7 points, in the first round Gandalv met Matěj Horňák from Šermírna Luka. Gandalv won the fight comfortably 7:3. In the second round, the best 8 (i.e. quarter finals), Gandalv met the most famous of the fencers - Martin Fabian from Bratiskavský šermiarský spolok. The fight was fairly even but in the end Gandalv didn't manage to claim victory and lost 5:7. Gandalv's overall ranking in the sword and buckler category is 5th to 8th (due to a new tournament management system used, the organisers did not provide full ranking as of time of writing this article). Considering that we do not train with sword and buckler at our trainings at all, this is a great result! Congratulations! 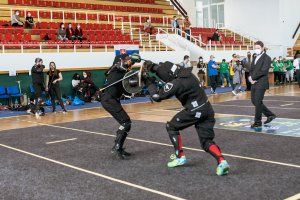 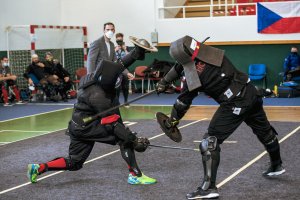 We thank the organisers Cech Terra de Selinan for providing the photos.

The second and for us the main category. 50 fencers from Czechia, Slovakia, Hungary, Poland, Germany and Austria have participated, a truly international environment indeed. As in the previous category, the tournament had a group and elimination phases. In the group phase, Gandalv was in group No. 6 which had 6 competitors, i.e. 5 fights. Gandalv won all of them and therefore became the winner of the group! The individual fights looked like this:

48 out of the 50 fencers advanced to the elimination rounds. Due to the great result from the group, Gandalv had a free pass in the first round and advanced straight among the best 32. In the second round he measured skills with Svetozár Sádecký from Bratislavský šermiarský spolok. Sadly, Gandalv lost this match 5:7. This was quite a cold shower after the great result from the group, and the final 17th to 32nd rank (as for sword and buckler, there was no full ranking at the time of writing this article). Additionally, after watching a recording of the fight, we noticed a scoring error happened during the fight causing one extra point being awarded to the opponent, changing the score from 3:4 to 5:4. Sadly, Gandalv didn't notice this during the fight (which is completely understandable, a fencer's focus is completely different during a fight). Of course, we don't want to dispute the tournament result or demand any reparation, mistakes just happen. We contacted the organisers, they admitted the error and apologised which we accept and there is no bad blood between us. However, we hope it will not happen next time :-). 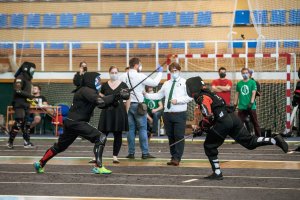 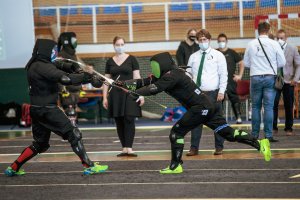 We thank the organisers Cech Terra de Selinan for providing the photos.

You can watch recordings of Gandalv's fights in both categories at his YouTube:

Grav was with by Trilby Media.